Home /
Reviews /
Might and Magic: Heroes 6: Pirates of the Savage Sea

Might and Magic: Heroes 6: Pirates of the Savage Sea 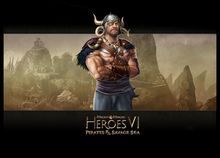 Heroes of Might and Magic is more than just a game. It is the cult turn-based strategy that has been carrying away thousands of people all over the world since 1995. In October, 2011 the sixth part of this fantastic game was released, and last month - on the 12-th of July - the first addition to Might and Magic: Heroes 6 was presented. Does it really worth our waiting?

To evaluate the advantages and disadvantages of the addition to the Might and Magic: Heroes 6, we need to remember everything we know about this game itself. The sixth part brought a lot of changes, and not everyone can say that those changes were for better. The game became much more easier, because the main conception of the sixth part was the simplification. If we are talking about the game play, then really the simplification is a good idea. But together with game play the developers declined the list of very useful features and options. The number of resources and races decreased significantly, and many changes touched the city's development. For example, in the Might and Magic: Heroes 6 some buildings were relegated to oblivion. But together with the simplification, Might and Magic: Heroes 6 has some advantages in the comparison with the previous versions. The model of boosting up your skills became smarter and more efficient, and now different races have various abilities and skills.

Naturally, the sixth part of Heroes received a lot of positive and negative reviews. If you are the one, who likes this game, we have the great news for you - the addition to Might and Magic: Heroes 6 looks like almost the same, as the game itself. And in some cases even better.

If you have ever played the previous parts of Heroes, you obviously remember that city's screen was the most exciting part of the whole game design. In the sixth version the city's screen became dull, small and simple, but with Pirates of the Savage Sea we again can enjoy the brilliant city views. The whole level of the graphics also has risen, and beautiful landscapes will accompany you during the game process. So, what is Pirates of the Savage Sea? It is the campaign with a little shade of corsair's atmosphere. The main character is Crag Hack - the pirate, barbarian and mercenary. This legendary personage has already appeared in the third part of Heroes, and now he is going to find out the secrets of the ocean. The enigmatic storm is destroying the ships in the Savage Sea. The pirates panic, they know that the waters are dangerous and mysterious, so they hire Crag Hack to find out what is happening there. He is going to sail the sea and hunt the Thunderbird - the reason of this magic storm. The story is as easy as ABC, and sometimes illogical. The final is absolutely disappointing, but has a lot of bright special effects. The spirit of the sea robbers is lost against the traditional atmosphere of the Might and Magic: Heroes 6. So, while playing you will find that nothing has changed, and the game still remains its essence. But actually there are some additions, which will surprise you during the gaming process. The weapon, armor and artifacts were updated, and now you will have a chance to use the spectacular Dynasty weapon and the nice set of pirates' artifacts. The most interesting one is the pirate hook. When you are kicking the opponent using this weapon, you are getting +4 to morale. Really amazing and helpful. Also in the pirate's chest there is the ring and hat with interesting bonuses. Which ones? Let it be a secret. The main problem of the Pirates of the Savage Sea is that there are no pirates at all. Our hero and his army will build the cities and fight the enemies, but almost never sail the seas. The action occurs on the islands, and to get from one island to another you need only a few clicks. However we have a particularity of the game - you need to divide your army to protect all your islands. So don't take all your warriors to the journey, because you risk everything you have conquered.

Might and Magic: Heroes 6: Pirates of the Savage Sea is the game that was created for real fans. If you have missed the rude and warlike HoMM, you will enjoy this campaign. The minimal changes decorated the game, but almost everything remained old-school and usual. The developers are promising us over 10 hours of the breathtaking adventure. And how much time you are going to spend on Heroes?