Guardians of the Galaxy Vol 2 Review

2017-05-12by Anna Stepko 5769 views
I honestly wonder how a movie can be that good. I’ve been to the cinema on May 10th and I still can’t concentrate, that’s how excited and tuned I am after watching Guardians of the Galaxy Vol 2. I’ll try to express my opinion and emotions properly in this Guardians of the Galaxy Vol 2 review, but if I’ll get lost in my thoughts — let me know in the comments below :)

Note: spoilers alert!
I’d like to start with the crazy amount of events that James Gunn (GOTG and GOTG 2 director) had put into the movie. If you’ve watched Guardians of the Galaxy Vol 2 you’ll definitely remember the first fighting scene, where the focus is on baby Groot (cute, cute, cute!) and there’s sooo much stuff going on around him on the made-up battlefield. That’s basically how the whole movie felt like. Once you’re distracted you lose the point for a few moments.

Other stunning things were the dialogues and relations between the characters. There are so many revelations you can simply get lost. I’ve heard a negative opinion that Guardians of the Galaxy Vol 2 never holds an intrigue, once the question is mentioned it gets solved right away. But I can’t consider this a bad thing, imagine if all the secrets would reveal with a delay — you wouldn’t understand the relation between them. And the whole plot would be mixed and tangled.

Sometimes it felt like the sensitive moments in GOTG 2 were too dramatic and long, boring. I think you’ll agree that when the fast and energetic music quickly changes to slow and touching, and it happens too fast… That’s weird. But it didn’t affect the final impression at all.
What is also great is that the connection exists between all Guardians of the Galaxy Vol 2 characters, everyone is involved:

Phew, I think I’ve mentioned everything I wanted.
So the reason why Guardians of the Galaxy Vol 2 is just as awesome as I describe — it’s not a typical MCU movie at all. The general impression from the latest Marvel premieres (Dr. Strange, Logan and Guardians of the Galaxy Vol 2) is above “Marvellous” and “Oh my God, I want to watch this once more”. But what is more important — it seems like Marvel stops reviving the characters.

Peter and Yondu — And the “Dad of the Year” award goes to...

What Yondu did is so precious and right. I mean, he finally realized that he didn’t do much of good stuff, as he claims at the end, and he saves Peter by sacrificing himself.
"He may have been your father, Quill, but he wasn't your daddy."
And that is breathtaking! It makes you empathetically sob, that’s why endless characters’ reviving is not good for MCU fans.

Gamora and Nebula — One baddie becomes better, another — even worse 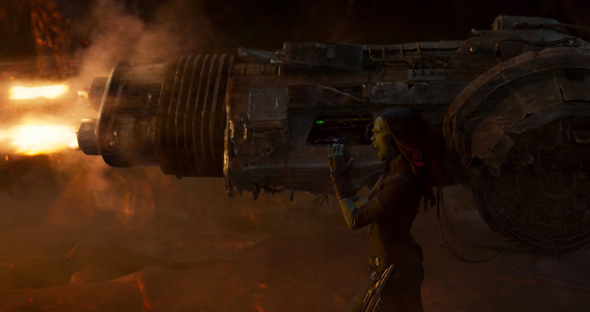 How awesome is the fact, that in GOTG and at the beginning of Guardians of the Galaxy Vol 2 you see Nebula as a terrible, vengeful person, and at the end, she reveals what she actually felt during her life with Gamora? She’s not that bad, that’s what Thanos made her. He had put Nebula and Gamora to fight against each other, and Gamora won every single time. That’s why he tried to “upgrade” Nebula: he had replaced her body parts with robotic pieces. This makes him even scarier, and I think that nobody knows more that Nebula knows about him. Thus, she may take part in Infinity War, and I can’t wait till the moment when this terrible beast dies (if he does, actually).

There’s nothing to say, except that I’m really glad Ego died. Well, it would be better if he didn’t, but there was no other way. It’s a pity (and weird) that Peter can’t use his magical power now, but I think it’s even better for him. However, it won’t be a surprise if James Gunn revives his superpower later.

What’s so special about Guardians of the Galaxy Vol 2?

You get tired of those super people who simply can’t die. I’m not trying to tell that death is good. It’s not. But it’s realistic. And the relations between characters, that I’ve mentioned above, are realistic too. Everyone has a family, and you can’t always heal and carelessly dream of shawarma once the battle is over (if you do have feelings and affection from what surrounds you). That’s why each MCU movie crawls closer to reality and to what regular people are. It makes you think about stuff that is more important, than the material things.

Now about the rest of Guardians of the Galaxy Vol 2 characters:

Another thing I loved are the geeky easter eggs. See, I’m talking about a movie that is geeky itself, ‘cause it’s MCU. And the easter eggs are double-geeky. They’re related directly to the comics, so it’s hard to find ones if you’re not a comics lover. But the movie doesn’t seem crowded with references, it’s easy to watch. Plus, it’s a good way to encourage people to get to read comics if you still hesitate to read or not to read.

Right like is was after the first GOTG movie — you couldn’t keep yourself sitting. When baby Groot started dancing at the end of the first part — [Jackson — I Want You Back] — the hardest thing was to keep calm. The same thing happened at the beginning of Guardians of the Galaxy Vol 2: this time, it was [Electric Light Orchestra — Mr. Blue Sky], and it was great. What about some sensitive moments? When Peter and Gamora dance, there’s [Sam Cooke — Bring it On Home to Me] playing in the background, that was so sweet and heartwarming. But the most intense moment remains the one when Yondu said about that he “used his heart to control the arrow” and Peter starts to resist Ego, [Fleetwood Mac — The Chain] starts playing. Great! This multiplies the emotions you feel and gives you goosebumps.