Have you already enjoyed playing Fallout Shelter on PC? Now Fallout Shelter is available on Steam! That’s really awesome, I might admit that I’ve underestimated this PC version. It’s way more comfortable than on tablet or phone. I’ve spent about five days in this game, there were times when I forgot to eat and sleep (I’m not kidding). The last time I’ve played Fallout Shelter on my cell phone was in 2015, I guess. And a lot of things changed, and these changes made me uncomfortable at first. Then I figured it out how to vault, and now I’d like to share my playing (and cheating!) experience with people who don’t have mush skills in this game. The download link is here: Weekly Digest: Fallout Shelter, Battlefield 1, Watch Dogs.

First of all - Let me brag a little bit. This is my vault after five days playing: 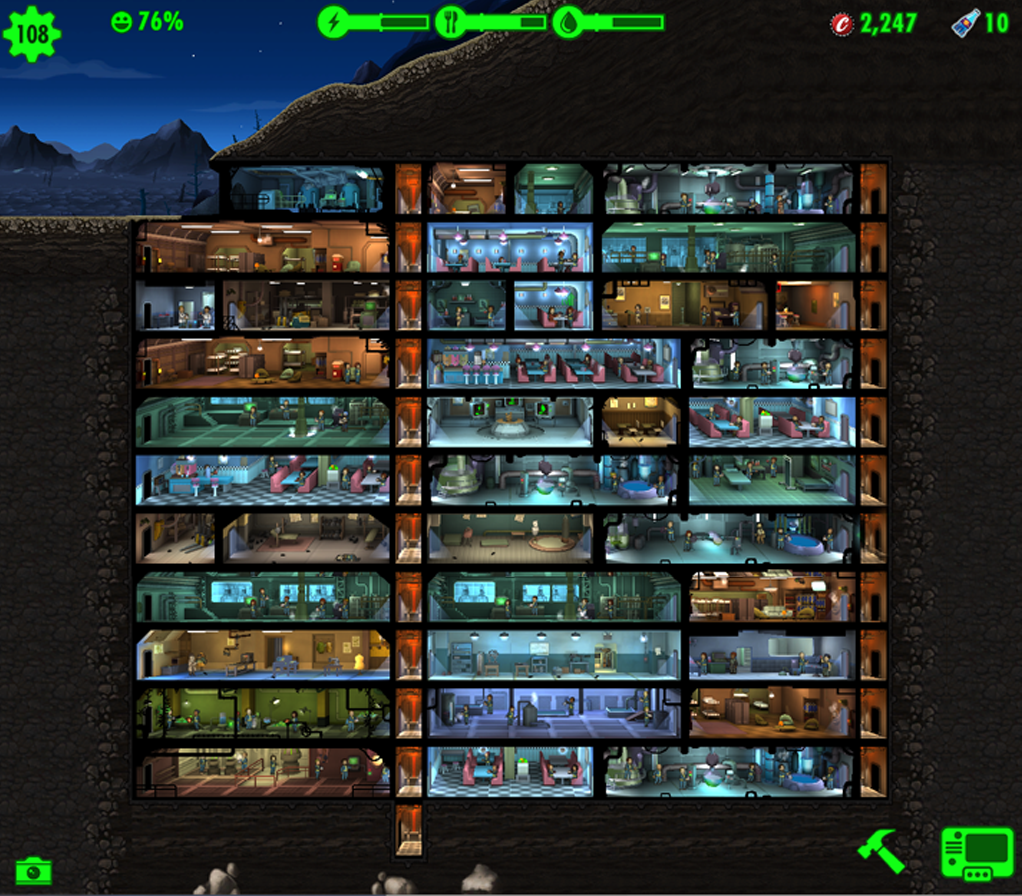 I’d like to start with the S.P.E.C.I.A.L thing. Every person has these abilities: strength, perception, endurance, charisma, intelligence, agility and luck. These skills define where can a dweller work to gain the highest benefit. Now we’ll make a sum-up over all the places to work and train.

A very nice update appeared - the Nuka-Cola Bottler room! First I thought it will provide the bottles (like gems in the game, they can help you make things faster). But it provides water and food at the same time! That’s also cool. But not as cool as gems :)

This skill decreases the time two dwellers need to get a baby. Plus - the overall happiness increases if the highly charismatic person is near.

There’s no exact place to work, Luck is sort of an additional skill. It will help dwellers if they’re exploring Wasteland, it will give you a benefit when you collect provided goods: the chance of getting Caps is way bigger than usual. And if you rush a room to get resources quickly the probability of getting Success is much higher.

Fallout Shelter on PC Cheats: If you don’t have enough money to build a whole room you can check if you have an outfit that can increase the SPECIALs. If you’ve noticed, I’ve got two dwellers working in the Nuka-Cola Bottler room, and they both wear an outfit that increases the Endurance. (I didn't have money to build the fitness room and time to wait until they gain more Endurance).

One more update that surprised me were the pets. Animals in the vault! Although, I’ve collected only one cat. I think it’s only possible to find them in the Lunch Boxes. Anyway, pets increase dweller’s happiness, the one that currently has a pet. They’re like weapons or outfits, you can change them between dwellers.

Now let’s talk about the threats. The most hellish place is the Wasteland. Nobody sees what creatures are there, they’re terrifying. However, your vault is less dangerous for dwellers, but there are some creeps anyway. First of all - upgrade your vault door! If you’ve faced the Raider attack, Radroach or Radscorpion you need to fight, as they don’t have much health.

Fallout Shelter on PC Cheats: If your pretty visitors are Deathclaws (there are usually three of them) it’s really hard to fight them. The first time they came I tried to fight. Later I’ve understood that it’s just waste of time, and the trick I learned - you need to evacuate people from one floor to another. Make a mess! Deathclaws will just run over all the rooms, make a hole on the elevator floor and go away. Really, it’s way cheaper to do this trick then later produce a tonn of steampacks for everyone. A good thing - when the threat is gone all the dwellers come to their initial workplace. It’s awesome. Bless you, Bethesda.

If you decided to send some dwellers to explore the hell (I mean Wasteland) you need to know that you’ve got an opportunity to create outfit and weapons.

To make outfit and weapons you need materials. You can get them while exploring the Wasteland or…

Fallout Shelter on PC Cheats: Going on a quest! 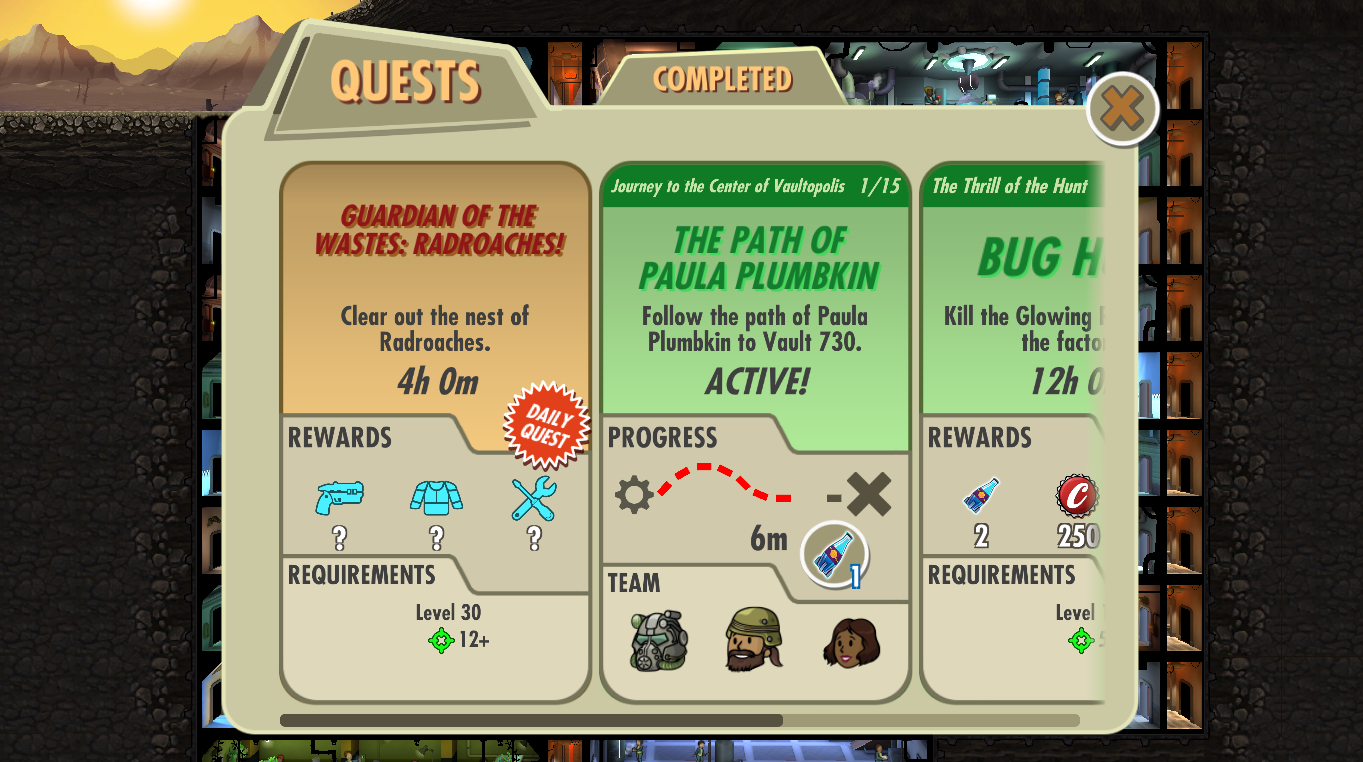 You need to choose people that will complete the quest, equip them and wait. When the quest is ready you’ll see this: 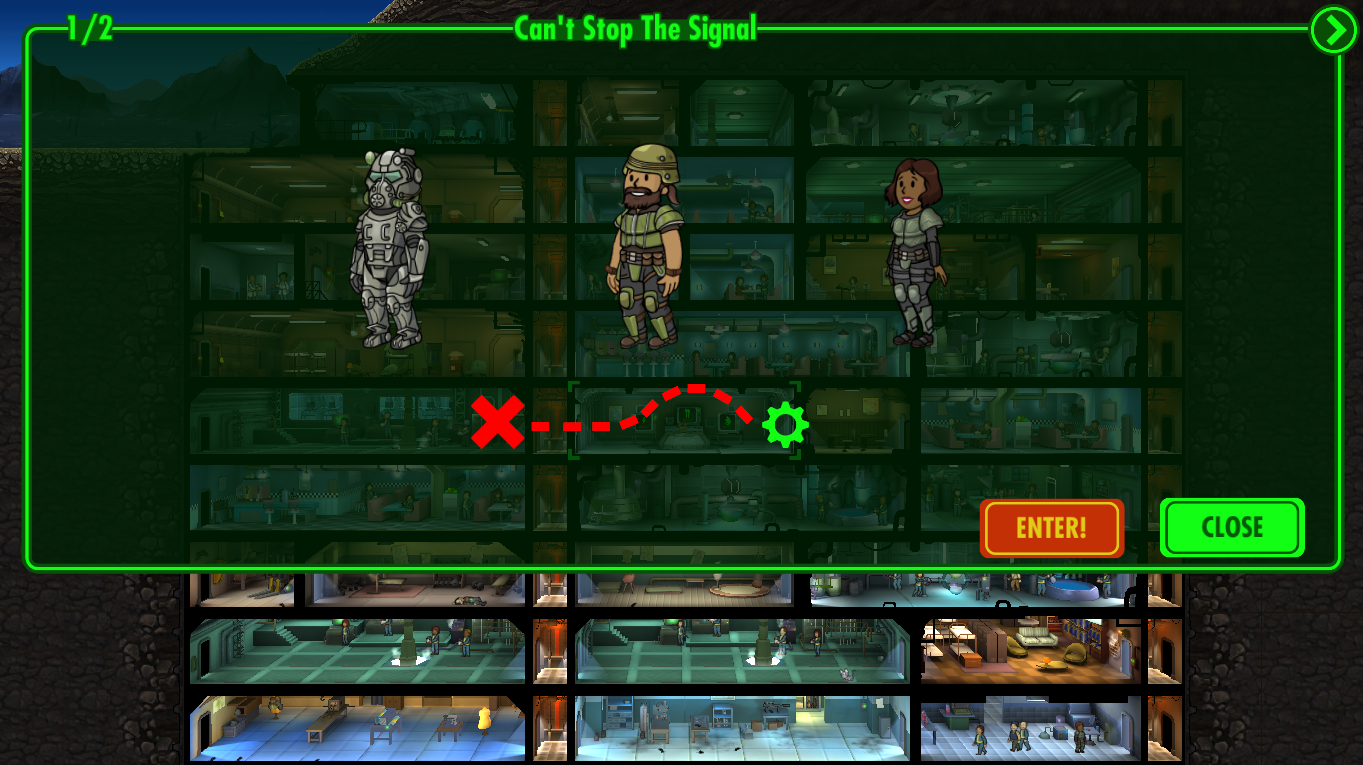 Now you need to enter, then you see the task you need to complete, and explore the place you were sent to. Usually, there are a lot of loot and enemies. 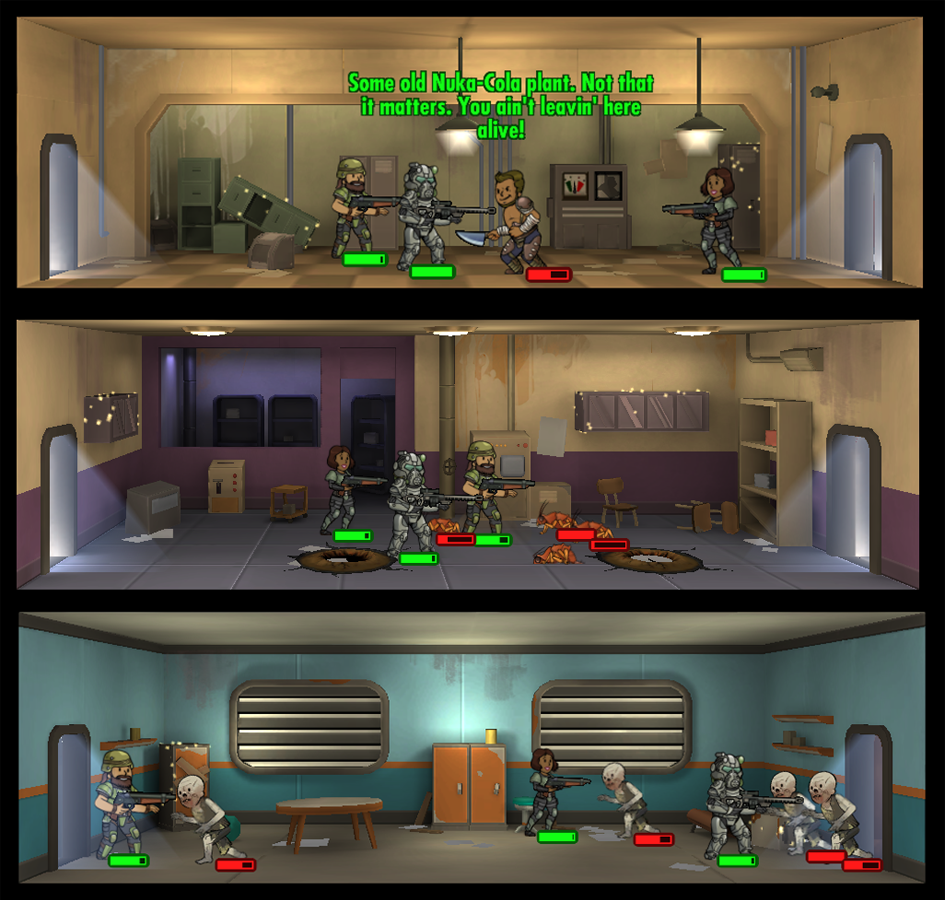 Make sure your dwellers have a lot of stimpacks and radaways, I usually take 3-4 ones for each dweller, because it’s always a lottery - if you’re gonna meet a Radroach or this creepy guy on the last picture. Ew.

You can also see pieces of furniture that are all in sparkles - these are places where loot is hidden. Once you’re done with enemies in the room you can collect them. When the quest is completed you’ll see this: 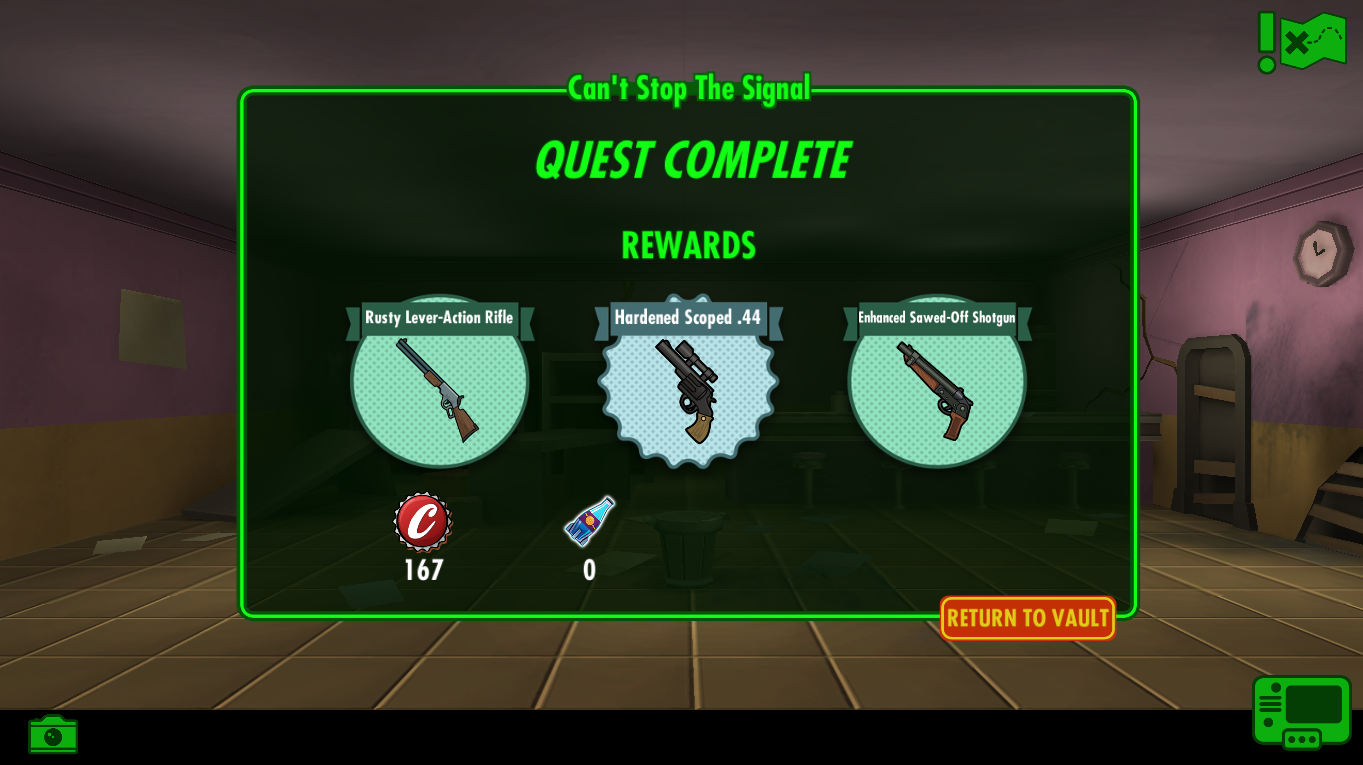 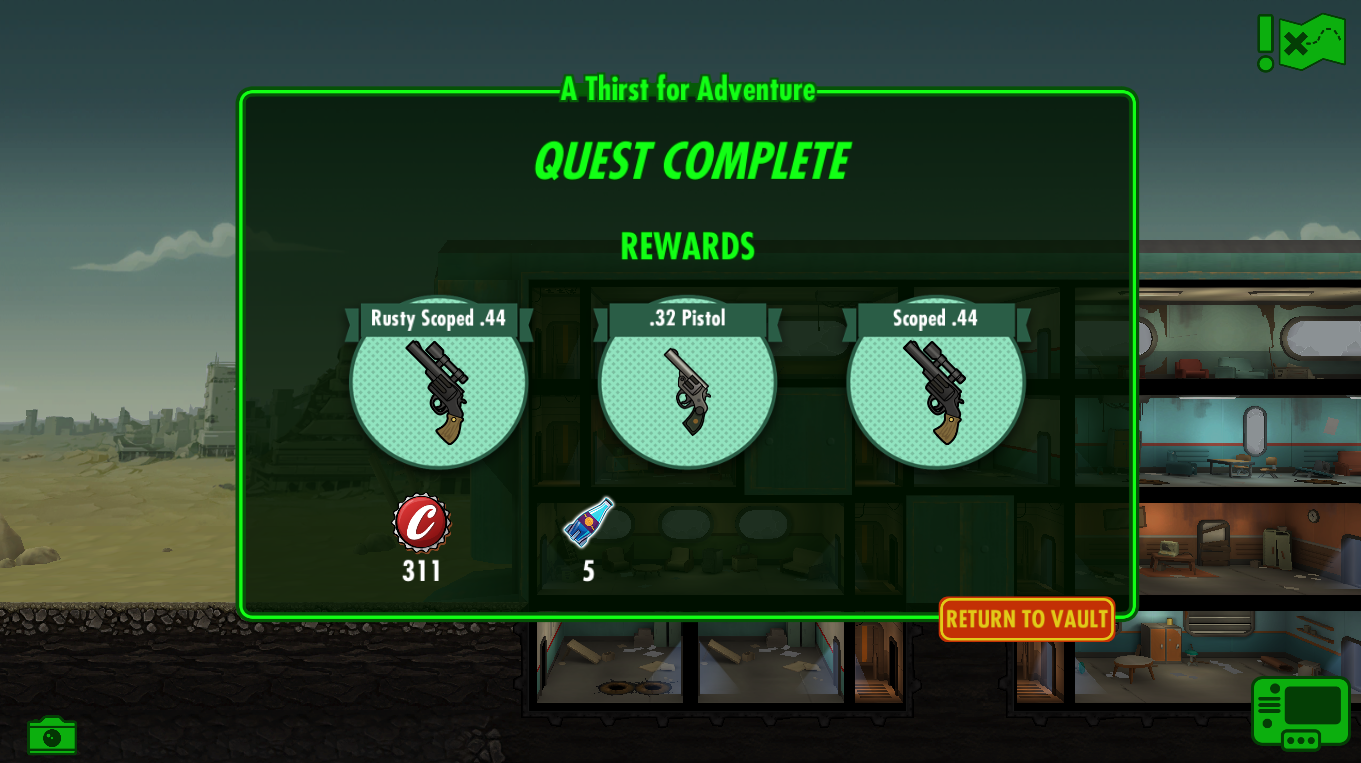 Also, Fallout Shelter has one more stylish update - the Barbershop. You can customize your dwellers here and increase their charisma.

And lastly, as you’ve had enough patience to read the article I’ll tell you about the Fallout Shelter on PC Cheats. I’ve been looking for them and found weird videos with downloading links, and decided not to put my laptop into the malware’s hands. The easiest wat to cheat is to change the time on your device. It was more complicated on a cellphone, but on the computer, it’s much easier. You add 5 more minutes and you get the goods - Lvl up, resources, bonuses. Nice!

I hope this review was useful, be patient and have a good game!
Related game