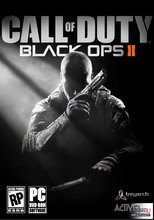 As has already passed a law game publishers this year, Callof Duty: Black Ops 2 - will be his vision of the game from the companyTreyarch. The game will be released as a continuation of the Call of Duty:Black Ops, but also as a separate part of the series Call of Duty. The gamewill be divided into two time zones in 1986 and 2025, where broke out again inthe cold war for the resources of the future. Our old friend and now grown oldWoods is in refuge for former agents called "Sanctuary." Woods willbe the main storyteller an invisible commentator, and link between the AlexMason in 1986 and his son - David Mason in 2025.

Almostall the technology in the game starting from fire weapons and ending withwalkers, and the drones are not futuristic sketches but prototype of the mostadvanced military development in the world. This is achieved thanks to the factthat the development of the game was attended by well-known experts BrookingsInstitute's arms. Actionsmultiplayer will also be deployed in 2025, although the graphics engine willremain unchanged. As well as a network mode will retain all of the best work inthis area - mode "Zombies", etc., and adds many new things, includingfighting modes, perks, and many other interesting things.

Releasedate November 13, 2012, and pre-orders for the first day after the releasebroke the record for Call of Duty: Black Ops, becoming the leader in pre-orderthe entire series of Call of Duty.