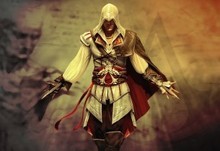 2012-07-24by  4250 views
The game character Desmond, who was the face of Assassin's Creed series will go on the deserved rest following the Altair and Ezio. Ubisoft Creative Director - Alex Hutchinson clearly hinted that the AC-3 will be the last game for Desmond. Although the hero was one of the keys to the series,  it doesn’t mean that further development of the game stops.

As far as we know, Ubisoft has  separate team, that has already started to work on a whole series of DLC to the game. It’s also known that "Season pass" will be available in the game, and it will allow download addons for free.
Tags:  Assassin's Creed III, News, Upcoming
Related game