The fifth Assassin’s Creed Unity patch has been launched

In the middle of last December, Ubisoft released the forth AC Unity update, and in two monts its employees presented the game’s next patch, about which we are going to tell you in details right now.

Thus, yesterday, the developers of this action-adventure launched the new AC Unity patch, which is already available on PS4 and Xbox One, and in a few days it will appear on PC. Besides the multiple fixes, which we will describe a bit later, the fresh update has unlocked the exclusive content from the Initiates and the Companion App of the game. And it means that now in order to get the gold or blue chests, for example, you don’t need to complete some specific missions in the Companion App.

As for the changes, which the fifth AC Unity patch will bring to the game, these are:

- the fix of the error in the Find Leon mission in the story mode of Dead Kings DLC and the problem with the gear and outfit rewards’ relock;

- the improvements of the general performance and stability of the game, i.e. there won’t be random crashes during the play in the co-op and single player modes;

- the elimination of the different matchmaking and connection issues as well as the replication ones between the client and the host and some problems with My Club feature;

- the fix of the various problems and bugs in the menu, HUD and navigation.

The detailed list of the changes is available here.

Have you already downloaded the fresh AC Unity update? Which bugs, according to you, haven’t been fixed yet? Leave your comments below the news. 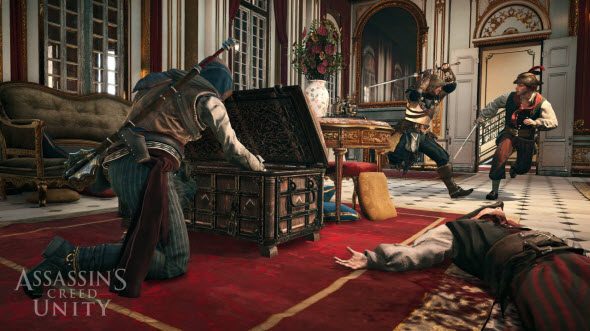