Home /
News /
Brazilian clubs are back in FIFA 16

Brazilian clubs are back in FIFA 16

Recently, Electronic Arts studio has announced the returning of Brazilian clubs in FIFA 16. Let us remind you that the previous instalment of the popular franchise didn’t include these clubs due to some problems with license. “We know FIFA fans love playing with Brazilian players and teams across the game, so adding 16 clubs is positive news for all fans”, - the studio’s representatives said.

The Brazilian clubs in FIFA 16 will be located in Rest of the World menu section. The clubs will be available almost in all project’s modes. Only in FIFA Ultimate Team, players will have to install a special update. And in the Career Mode, the teams will appear in the transfer database.

So, here are 16 Brazilian clubs in FIFA 16: Atlético-PR,Atlético-MG, Avaí, Coritiba, Chapecoense, Joinville, Cruzeiro, Figueirense, Fluminense, Grêmio, Internacional, São Paulo, Ponte Preta, Palmeiras, Santos and Vasco da Gama. At launch, each team will have its authentic symbols and kits. If gamers want to change the players’ names or visuals, they will have to download an update. 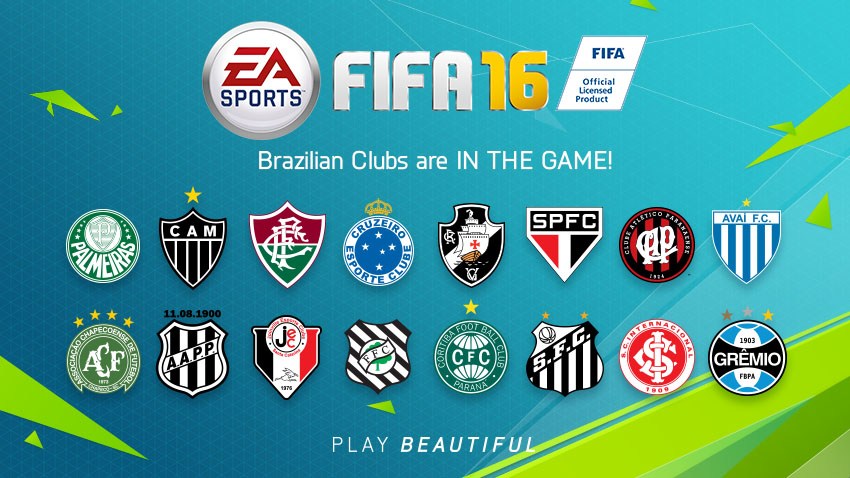 FIFA 16 release will take place on September 22nd in NA and on September 24th in Europe. The project will hit PC, current and last-gen consoles. Last week, Electronic Arts revealed the features that aren’t included into the game’s versions on PS3 and Xbox 360.