An intriguing news concerning the next instalment in the popular football simulator series - FIFA - has appeared online recently. So, if you a real fan of this franchise, then you will be interested in the following information for sure.

Thus, a few days ago, a page of the upcoming part in FIFA series appeared at the Italian department of the famous Amazon online retailer. On the game’s page, there is the information not only about the project’s launch date but also about the platforms, on which the forthcoming simulator will be availble. According to Amazon Italia, the FIFA 16 release date is set for the 24th of September 2015, and the project itself has to come out on the current and last-gen consoles as well as on PC. As it seems to us, the mentioned FIFA 16 release date may turn out to be trustworthy, because at least 4 previous parts in this franchise were launched exactly at the end of September - from the 23rd to 30th of this month. 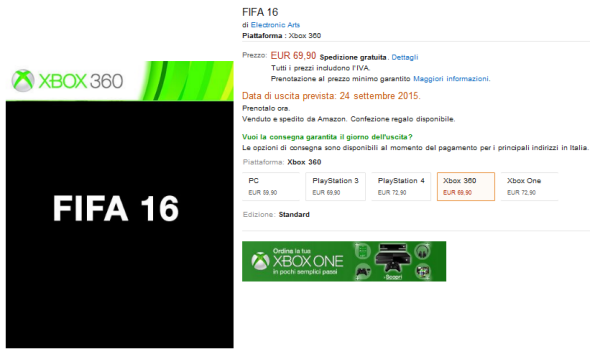 As for the platforms, on which the FIFA 16 game might be available, they seem to be plausible as well, at least for us. But nevertheless, so far it’s only a rumor, so we ask you to treat this information with a grain of salt and wait for the announcement from EA, which is likely to be made during the annual E3 expo.

By the way, if you have suddenly forgotten what the previous instalment in the series - FIFA 15 - is, then we offer you to familiarize with our review of this project.

Are you interested in FIFA 16 game? Do you consider the presented release date of the project to be trustworthy? Leave your answers below the news.