There are good news for the fans of the popular Tony Hawk’s Pro Skater skateboarding simulator series. The developer of the next instalment in the franchise - Robomodo company - has shared the latest details about the future project in the PlayStation blog. According to the official information, Tony Hawk’s Pro Skater 5 on PS4 and PS3 will contain some pleasant bonuses for the players.

So, as it’s reported, in the abovementioned versions of the upcoming project, the gamers will find three masks of such popular characters as Sackboy from LittleBigPlanet, Ratcher from Ratchet & Clank and Sweet Tooth from Twisted Metal. These masks will be available to all players regardless whether they have Tony Hawk’s Pro Skater 5 on PS4 or on PS3. Unfortunately, for the current moment, it’s unknown if the owners of the project on the Microsoft's consoles will get some exclusive content as well. 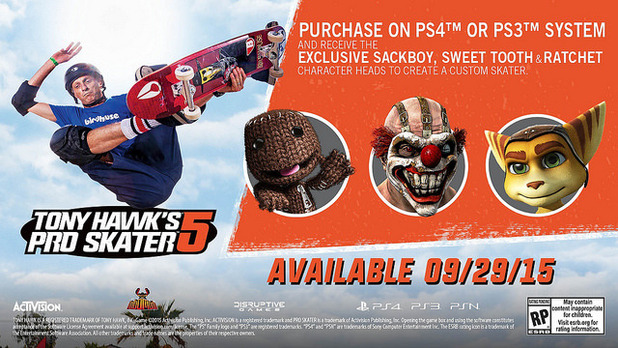 Let us remind you that the release of Tony Hawk’s Pro Skater 5 on PS4 and Xbox One will take place on September 29th, 2015. The game will hit last-gen consoles a bit later this year.