As you might have noticed, we’re mostly reviewing PC or console games. Although, today GameSpace team would like to make an exception: we present the new arcade game for Android and iOS named Poplings! This free mobile game is a sip of fresh air among typical apps you’ve already used to. Let’s start with the plot:

You live in a quite nice home. After you’ve come back from the long journey you've noticed that something terrible happened: your house is infested with tiny angry creatures - Poplings. To get rid of them, you need to tap your fingers on each of Poplings, that’s the only way for them to disappear. This arcade game for Android and iOS seems easy, huh? It’s actually not.

There are different types of Poplings that have superpowers. However, you’ve got superpowers too: there are some power-ups to help you in the struggle. Don’t forget that your time in this free mobile game is limited: the faster and more accurate you are the bigger score you’ll get in the end.

We’re about to give you some tips on how to combine different types of Poplings and power-ups to succeed. 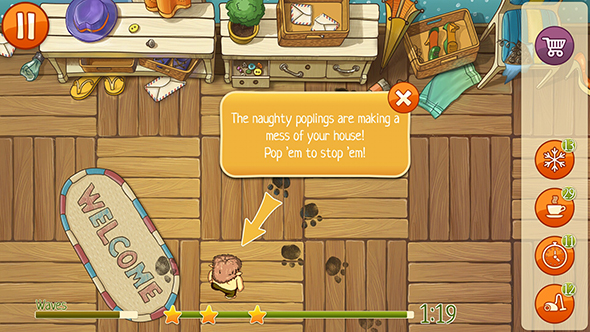 It’s the most simple type of Popling that has no special abilities. You'll handle it with a single tap. 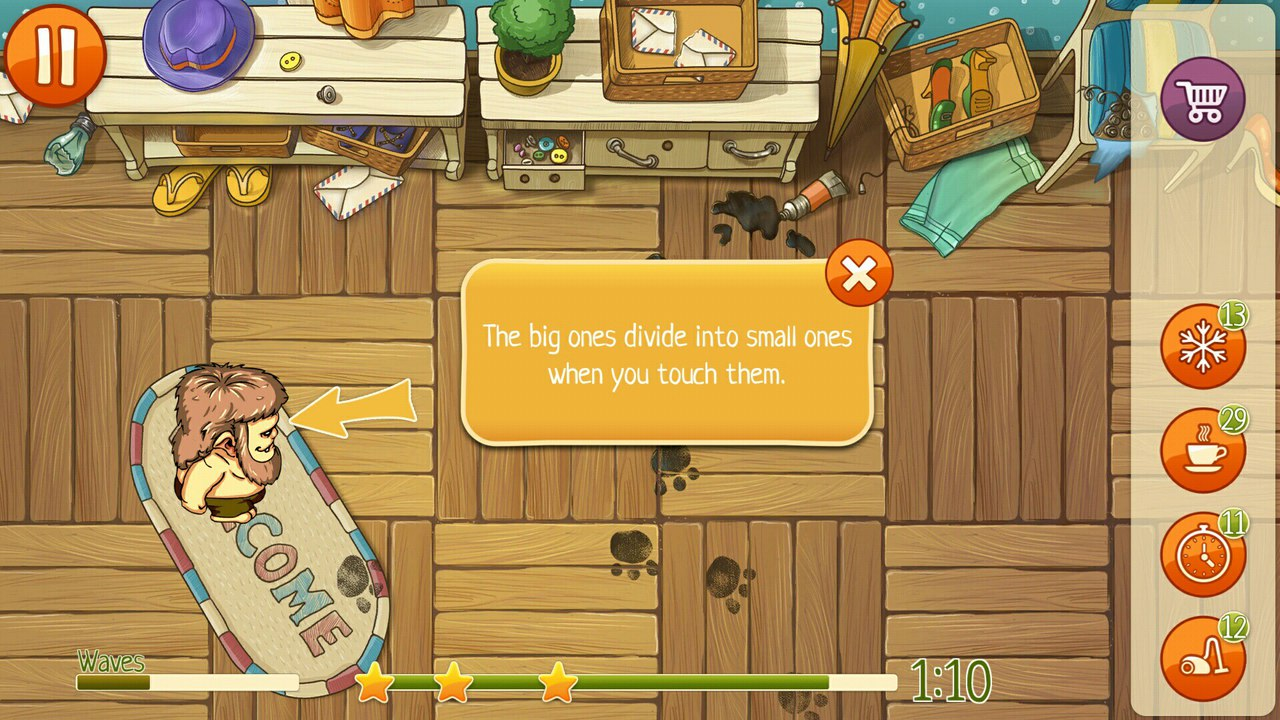 The bigger the Popling is - the more times you need to tap him to get to the smallest one. The best power-ups here are Espresso (you’ll have more time to pop wisely) and Icy Touch (it will completely pop the Popling, no matter how big he is). 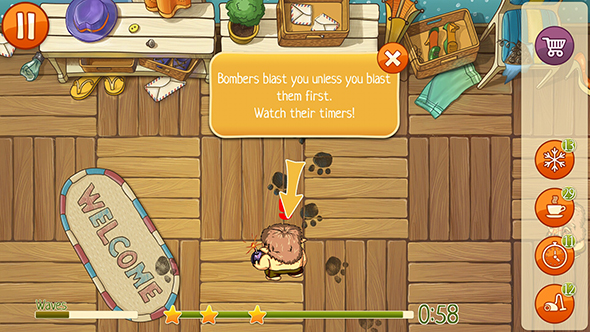 He’s a tricky guy, but he can be useful. You need to watch out and try to tap him until his timer runs out. Otherwise, he’ll blow you up and you’ll lose your time. If you pop him around other Poplings - you’ll make them stutter for a while and this move gives you a small benefit.

Tip: If you see a big Popling with a bomb - go for it! He won’t divide into two small Poplings. Any of the power-ups will be helpful. 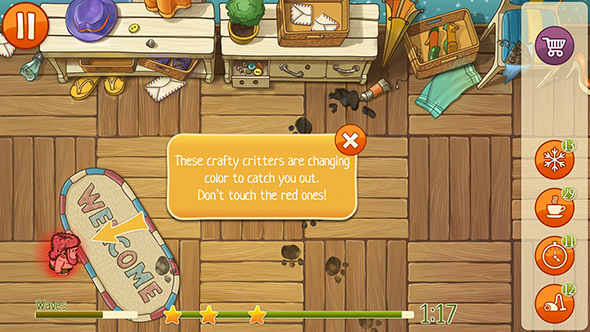 The mission looks easy for you? Ha, here is a thing to make it much harder. Each popling is a tricky enemy: from time to time it turns red and if you tap the red one, you lose 2-3 seconds. This was the hardest thing to get used to. Any of the power-ups will be helpful. Remember that any Popler can be red, even if it's one of the following types. 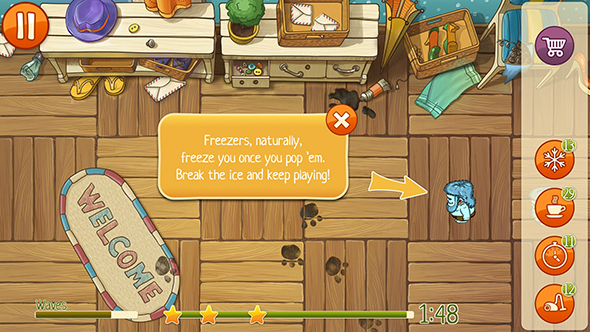 These ones are really tricky: when you pop them your screen freezes and you need to tap 2-3 times to break the ice and play again. 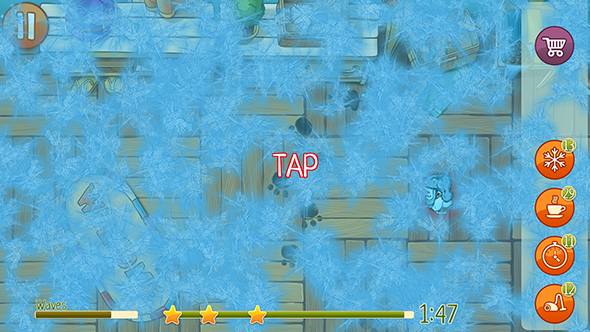 The best power-up is Icy Touch and Extra Time. Espresso is pointless in the case of Freezers and Vacuum cleaner will make a mess. 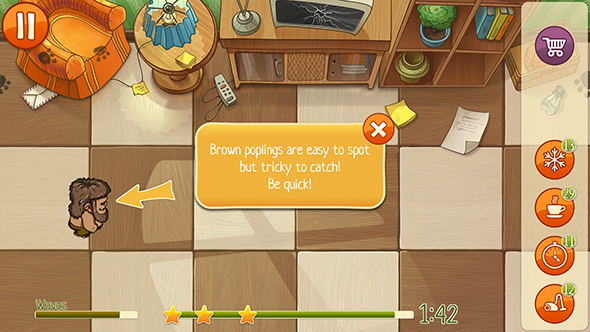 Brown Poplings are faster than the others, but they’re not faster than your fingers! The best power-up is Espresso, the worst - Vacuum cleaner. I don’t know why, but all the Poplings start to fly around and make a huge mess. 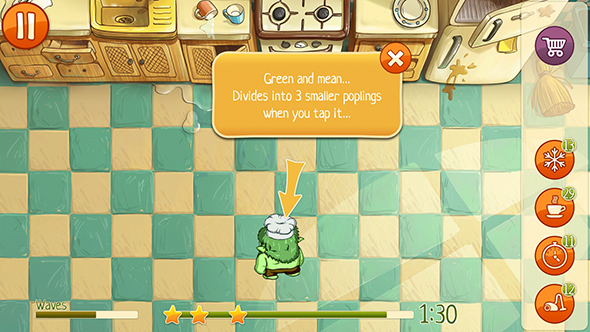 Green Poplings divide into three smaller ones, not two. 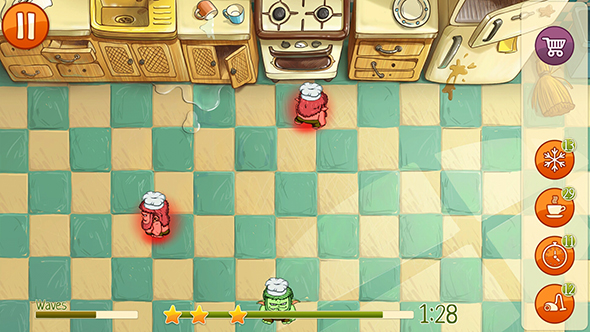 Vacuum Cleaner is the best power-up because the room is getting really messy. 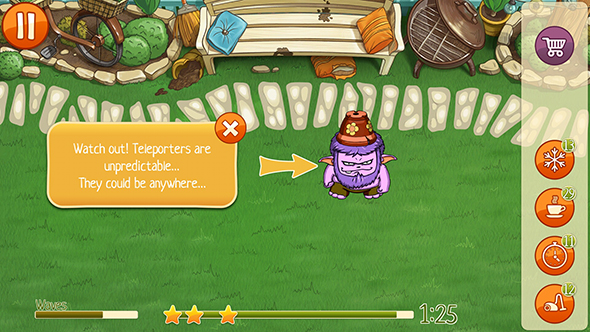 This type of Poplings is the last one: Teleporters have an ability to spawn in random places. 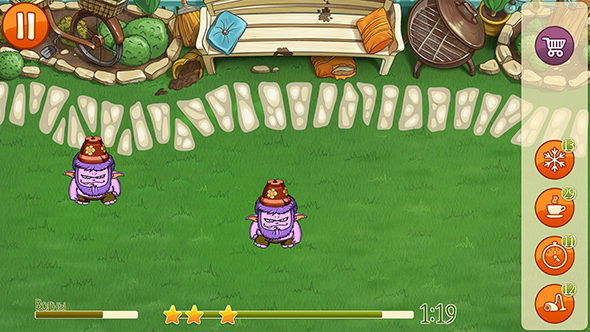 The most useful power-up for you is Espresso, others may help, but not as good as a cup of coffee. There’s a good thing about these sneaky monsters: they don’t run around. Although they’re teleporting you don’t see the crowd of demons running around.

Tip: remember, that every time you pop a Popling one of your power-ups gets refilled faster.

You can also buy extra lives or recharge your power-ups in this arcade game for Android and iOS. Once you’ve purchased something, ads will disappear. There are 5 episodes in this free mobile game that are available right now, one more is coming soon.

As for technical requirements - if you’re using an Android device you must have at least Android 2.3. If you’re owning the Apple device - iOS 6.0 is required. By the way, here are the downloading links for this free mobile game - for Android and iOS.