Home /
Reviews /
Games instead of vitamins

Games instead of vitamins 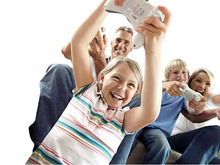 Almost every person, who is fond of computer games, has heard that this habit is dangerous for his health. However, plenty of researches claims only one fact: video games do change our brain. But they change it only for better.

A lot of different independent researches confirm that games makes us more creative and perceptive and improve decision-making. In University of Rochester the scientists tried to find the connection between video gaming and the decision-making ability. They tested the group of gamers and people, who are far from the game world. According to this study people who are fond of action-games make decisions 25% faster than others. The most skillful players can make their choice and act six times per second - four times faster than the common people.

The interesting fact about women-gamers was found - video gaming helps developing the ability to manipulate 3D objects mentally. The men have this skill naturally, but women need to train themselves using computer. By the way, the statistics says that women make up about 42% of the whole video game players. In one middle school in USA the scientists were trying to find out how creativity of the pupils relates to video games. The three-year study showed exciting results: regardless of gender and the type of the game they played, all young gamers get higher marks in creativity tests. The scientists ranked pupils on the Torrance Test of Creative Thinking, that is highly popular in the world. Also researchers got another interesting fact: using computer for non-gaming purposes, speaking via Internet and fancy for mobile phones has no effect on creativity.

The scientists are sure that the most active and often violent games train our brain more efficient, than the other ones. However, they haven't found the direct connection between virtual violence and our brain improvement. That's why we hope that one time we will get the game that really helps to make us better and fits to even small children. But the FBI statistics shows that youth crime declined during the last years while the popularity of video games became higher. Of course these two fact don't correlate, but we absolutely can say that violent video games are not so dangerous for children as their parents are sure.

And some professions even require video gaming! The scientists from Boston studied the laparoscopic surgeons' work. They found that gamers make operations and sutures 27% faster and 37% fewer err. That's why the researchers sure that surgeons should train themselves using video games, and video gaming can be the part of the students' educational program.

One another research is from American Pain Society. The scientists discover that when people are playing, their brain is in virtual reality, so they don't notice the pain or depression. So if you feel a little sick, go for your favorite video game. This treatment is much more helpful than medicine with a lot of side effects.

Also video gaming affects the vision deeply, and even can cure some eye diseases. The action games increase eye contrast sensitivity. Due to this feature of vision people can discern objects and see them apart from other ones. What do video games do to your eyes? While playing the eyes are working, and the visual nerve of our brain is training. So the regular gaming improves the vision. By the way, the ability to discern objects declines with the years, so video gaming becomes even more useful for those who over 30 years old.

The researchers used two groups of people. The first one was playing Call of Duty and Unreal Tournament during nine weeks, and the second one was training by Sims 2. The results showed that only subjects from the first group improved their vision by 50%, so only action video games help making our vision better. Another research was made in Canada. Six people with cataract played Medal of Honor five days per week for two hours. After only one month of tests the results were fantastic: five people noticed that their vision became much better.

Also those who play video games have better night driving ability. It is a great skill, isn't it?

And the researches from Cologne found out that any video games are useful for old people. Why? We have already written about it: their vision improves, and they can forget about chronic illnesses for a short while. That's why playing grandpas and grandmas feel themselves much better. No doubt, video gaming really changes people. So does reading, playing musical instruments and educational telecasts. The high concentration and "useful" surges of neurons while gaming affect our brain like gym the muscles. So let's play because it's useful! But keep within limits. No one scientist will tell you that you can stay near your computer more than for 45 minutes - after you need a piece of rest.