The world premiere of the highly-anticipated Avengers: Age of Ultron movie will hit the cinemas in almost three months, but meanwhile the future blockbuster continues getting more and more new rumors. Recently, two unconfirmed news about the forthcoming motion picture have been spread across the Internet. However, they haven’t been officially confirmed yet, so we offer you to take them with a grain of salt.

The first rumor concerns an actor Andy Serkis. The information about him taking part in the future Avengers: Age of Ultron movie appeared quite long time ago, but no one knew which exactly role he will be playing. And now, according to the reports from some “reliable source” - SchmoesKnow portal, - 50-year-old Serkis will star as a former Dutch scientist and a professional villain - Ulysses Klaw. 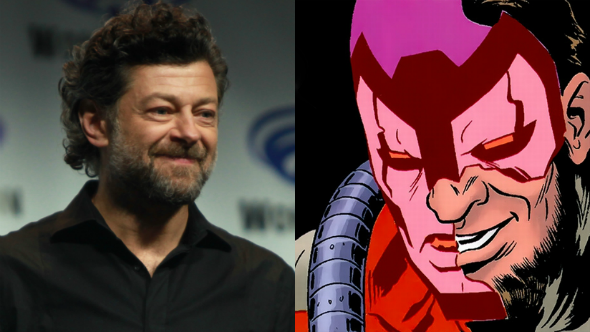 The next unconfirmed news tells about a mysterious female character, who will play a meaningful role in the upcoming Avengers: Age of Ultron movie. Again, the same source states that it’s Mantis. She lived with the Priests of Pama, and they taught her the martial arts and the telepathic communication with a special race of sentient plants. According to the rumors, Mantis will become a link between the two universes - The Avengers and The Guardians of the Galaxy ones. This is what SchmoesKnow writes: “This would seem to make a lot of sense as she 1) has direct ties to Thanos; 2) has even stronger ties to Vision, Quicksilver, and Scarlet Witch; 3) has a personal vendetta in the comics against Klaw and most importantly has been a prominent member of both The Avengers and the Guardians of the Galaxy”.

And do you believe such Avengers: Age of Ultron rumors or not?