Ice and Fire of Westeros at Comic-Con 2012 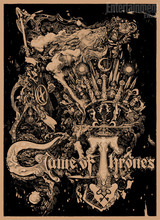 2012-07-18by  4930 views
Soon everyone will be able to take on the role of the Lion or the Wolf, the Deer or the Dragon, or just the king or queen of Westeros in a new MMO based on the book "Song of Ice and Fire" by George Martin. Bigpoint and Norwegian studio Artplant will allow everyone to immerse themselves into the world of intrigue, power struggles and bloody battles to conquer the Iron Throne! The story will evolve after the death of King Robert Baratheon in Westeros oppressed by war and chaos. Players will be given the opportunity to go through all the key points of books plot, but the game itself will be based on the TV series, that according to the developers would have no impact on its content.
The first trailer and some screenshots of the game was presented at Comic-con 2012.
The game will be released approximately in 3rd quarter of 2013.And on this site, you can subscribe to the newsletter from the developers of the game.
Tags:  A Game of Thrones, Comic-con, News, Upcoming
Related game