2017-06-15by Anna Stepko 4119 views
According to what we’ve seen during Bethesda E3 presentation, they’ve gone VRing. If you know how VR development process goes you know that it takes a lot of time. That’s an explanation of why Bethesda didn’t strike E3 2017 with hella many new games. Although there were about 4-5 new items, they were stunning and unexpected. 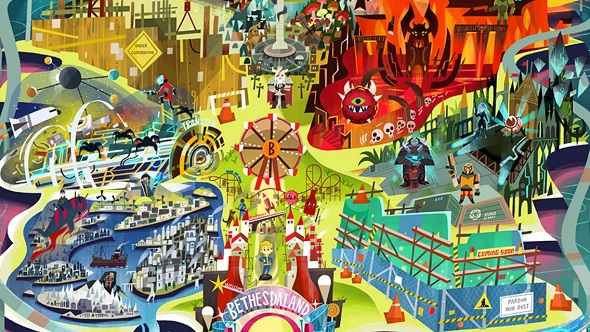 The greatest stuff in town: heart attacks become real with DOOM VFR (any suggestions what F stands for?). Both games will work on HTC Vive and PlayStation VR, DOOM has no release date for now, and Fallout 4 VR does — available in October this year. Check the trailers and see what awaits for you soon.

Craft weapons, outfits and modify them the way you need in Creation Club! Developers also add some paid modifications, that’s the first time they monetize their apps (except Fallout Shelter). Your mods will be safe with your personal account and available anytime. Coming to PlayStation 4, Xbox One and PC. Watch the trailer to learn more:

Nothing much to say here, autumn 2017 TES V comes to Nintendo Switch.

Dishonored: Death of the Outsider

A new story awaits. Billie Lurk — the protagonist of Dishonored: Death of the Outsider — returns to Karnaca. Her mentor — the legendary assassin Daud — helps her to pull off the ultimate assassination: kill the Outsider. Excited. Add to wishlist. Click.

This gorgeous survival horror has a stunning trailer. Although you don’t understand the plot of The Evil Within 2 once you watch it, it’s a good reason to ask Google about the first part. The coolest thing about game series that are directed by a single person is that they have a soul. This one does. Friday 13, October 2017 — The Evil Within 2 release date.

… With a Quаke World Chаmpionship! $1 million as a prize. Step up your game and use your skill :)

I can call this video a traditional Bethesda presentational trailer. Here are all the iconic items Bethesda has as a publisher: energetic music, a lot of cool weapons, goofy and gorgeous cutscenes. That’s amazing, October 27 this year is Wolfenstein 2 release date, can’t wait for endless streams and epic gameplay moments! And although the video is long, it’s worth watching:
We really enjoyed Bethesda presentation, I don’t understand why people complain about that it was short. There’s so much cool stuff in it! Hope there will be no delays with these upcoming releases. What game are you gonna play first? Which one do you expect the most? Leave your impressions in comments!
Hope this article was interesting for you! Expect more E3 2017 news soon :)
Tags:  Bethesda presented on E3 2017, Creation Club, Creation Club for Fallout 4 and Skyrim, Dishonored: Death of the Outsider, DOOM VFR, E3 2017, E3 2017 Bethesda, Fallout 4 VR, Quake Champions, The Еvil Within 2, Wоlfenstein 2: Тhe New Cоlоssus, Тhе Eldеr Sсrоlls V
comments