2017-05-08by Anna Stepko 3649 views
Call of Duty WW2 release date confirmed — November 3rd, 2017, and the first trailer already appeared online. However, the second video related to CoD WW2 was posted right away after the trailer came up — the developers’ talk. The thematic of a game is really fragile and needs to be detailed, and that’s what we’re about to do. Here’s the Call of Duty WW2 trailer, by the way:
If you follow the link to YouTube you’ll see that there are a lot of dislikes (1 million likes and 90 thousand dislikes). That’s weird, ‘cause the trailer is really atmospheric and it’s about combat itself. No space ships, no lasers, only the real fight. As one of the users said, “all the dislikes are all the kids who grew up on boa3 and Infinite warfare﻿”, and I agree with him.

Call of Duty WW2 is said to be the “historically authentic” game and the greatest among all the war-themed-historical games. Although it seems really weird, like, how can you recreate the terrible events that passed? Developers claim that this is the biggest project (most of them) have ever been working on and that Call of Duty WW2 will be an “emotionally dark but beautiful” game, so gamers could feel the level of horror that possessed people from 1940 to 1945. 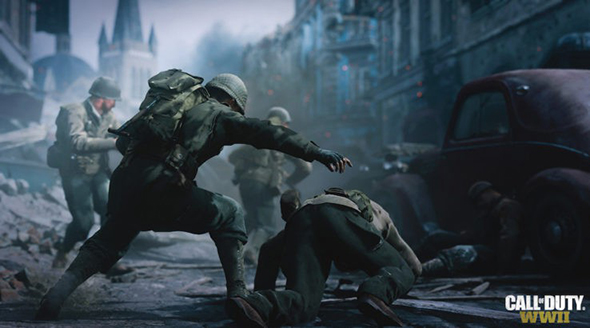 There’s been a lot of true location filming, so it would be easier to recreate them later, a lot of World War 2 weapon samples lying near 3D modelers. It all must be as close to reality as possible. Watch the developers’ talk below:
There’s something that was unsaid in this video: developers have spent about two years developing Call of Duty WW2, and the hardest thing was to implement the real history facts into the game. It’s not a secret that there were the good guys — Allies, and the bad guys — Nazis. And it’s important to make a difference between Germans and Nazis. It’s also important to understand, that Germans were doing their work, their duty, as soldiers. So everyone needs to be tolerant and see what’s going on.
"In no way are we going to glorify that position, but we also can’t shy away from it.”
GameSpace reminds that Call of Duty WW2 comes out on November 3rd this year. We hope for more news during E3 2017! Stay tuned :)
Tags:  Call of Duty WW2 developers, Call of Duty WW2 news, Call of Duty WW2 release date, Call of Duty WW2 trailer, Call of Duty: WWII, CoD WW2, CoD WWII
Related game